For a show about an apparently machine-minded sociopath, Sherlock fans really love pairing the characters up romantically. From the obvious (John and Sherlock) to the obscure (Mycroft and Lestrade) just about every character has been paired together by some fan on the internet somewhere. To celebrate this popular trend, the Sherlock‘s Home team has come together to have a look at the five most prominent “ships.”

John and Sherlock (AKA “Johnlock”)

Of course, no discussion of Sherlockian shipping would be complete without mentioning the original pairing of Sherlock and John. This particular ship has been fan-fiction fodder since Victorian times with the idea of these two being more than friends is replete throughout Sherlock. From from the very first episode (“Of course we’ll be needing two rooms” / “I’m not his date”), through poor Watson attempting to set the record straight in Series Two (“If anyone still cares, I’m not actually gay!” / “Is yours a snorer?” “We’re not…ugh forget it. Got any crisps?”) all the way to the balance of their relationship with Mary being part of the picture.

Much of the recent Johnlock fanfic is inspired by this series, much more than older shows or the Downey Jr. franchise. It seems as though Cumberbatch’s cheekbones have captured the romantic hearts of current fans more than any other iteration. (For high quality Johnlock fanart/fic, visit reapersun on tumblr. Beware searching Johnlock on tumblr though…). P.J.

Sherlock and Molly (AKA “Sherlolly”)

Sherlock and Molly’s relationship is probably the most developed of the series. In Series One, Sherlock coldly uses Molly’s affection for his own gains, as in “The Blind Banker” where he compliments her hair to get her to wheel the bodies back out for him to examine. In Series Two, however, that changes. In “A Scandal in Belgravia” Sherlock actually apologizes to Molly and kisses her on the cheek after being mean. Then, in “The Reichenbach Fall”, Sherlock tells Molly what she – and us – wanted to hear; she does count.

Even though Molly knew Sherlock was alive pre-Series Three, she still “moved on” and got engaged to Tom (who, unsurprisingly, looks like Sherlock). Sherlock doesn’t immediately realize this and asks Molly to accompany him on his cases. You might say he even flirts with her but stops when he sees her engagement ring. Throughout the next episode, Sherlock continues to show respect for Molly’s decision to marry Tom. Then suddenly we discover that Molly and Tom have split. Now it seems possible for Sherlock and Molly to finally get together. Or will something else get in the way? L.S.

Sherlock and Irene (AKA “Adlock”)

Sherlock’s and Irene Adler’s sizzling chemistry is felt throughout the show though they only appear together in one (and a bit) episode(s). “A Scandal in Belgravia” is a fan-favourite episode for its flirty dialogue and for teasing the possibility that Sherlock could actually fall in love with someone other than himself… or John.

Irene and Sherlock communicate primarily via text, with Irene repeatedly inviting Sherlock to “have dinner” which he invariably declines. Even so, there is an undeniable bond between them. Is it love, a grudging respect for a worthy adversary, or platonic friendship? Irene’s brief appearance in “The Sign of Three” implies that it may be more than platonic, much to the delight of Adlock shippers, even though that would be out of character for Sherlock. After seeing her in his Mind Palace, Sherlock exclaims: “Out of my head; I’m busy!” Why would he tell her to go away unless he really wanted her to stay? S.B.

Lestrade and Molly (AKA “Lestrolly”) 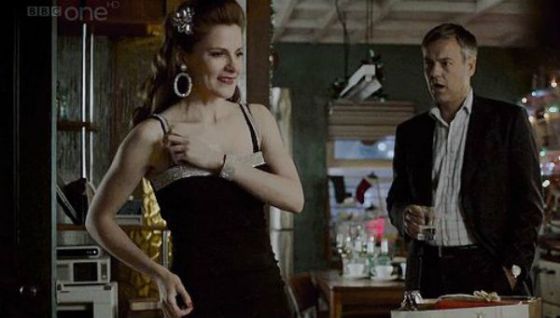 Lestrade and Molly are one of Sherlock‘s underdog couples as the evidence of any feelings existing between the pair in the show is a little on the shallow side. Nevertheless, if you look closely, it is there. Just look at the moment in “A Scandal in Belgravia” when Molly has dolled herself up at Christmas time to impress Sherlock. Unfortunately, it seems Sherlock didn’t notice – but if you pay attention to Lestrade in the background you’ll see someone did. His eyes nearly pop out of his head when he sees her.

This coupling is also a favourite of Lestrade himself Rupert Graves who often talks of how he thinks Greg harbours feelings for Molly. Maybe Molly should turn her attention from Sherlock to a slightly different detective… C.B.

Mycroft and Lestrade (AKA “Mystrade”)

I’m not exactly sure how this ship came about, but I know that Mystrade shippers are completely convinced it will someday become canon. The idea of a relationship between Mycroft and Lestrade is peculiar because, in the first two series, they are never shown together. Ever. It’s only in “The Hound of Baskerville” when Greg says to Sherlock “I don’t just do what your brother tells me”, that we find out that they even know each other.

However, in “His Last Vow”, there is a scene where Lestrade is with Mycroft in his office when they are searching for Sherlock after he’s “bolted” from the hospital. This is the first time they are ever shown together, and for the Mystrade shippers, that’s all the proof they need. L.S.

Vote for your favourite Sherlock ship in the poll below!