With fans as dedicated as us Sherlockians, there is rarely a scene in the series that gets entirely overlooked. Every scene is examined and noted for its importance, some more than others. Sherlock would be proud. However, even though these scenes are referenced occasionally by the fans, they aren’t getting the proper credit they deserve. Here is my list of the top five underrated scenes in Sherlock.

Sherlock’s best man speech is definitely my favourite scene in the whole series; however, the speech is broken up into a bunch of smaller scenes. The particular portion of his speech, where he lists some of John’s titles for their cases and a clip of each case is shown, is the most overlooked part. “The Elephant in the Room” is one of the cases mentioned, and the small segment shown after is hilarious and definitely deserves more credit than it currently receives.

4. D.I. Dimmock and the book search

“The Blind Banker” was voted least favorite on our recent episodes poll; however, it happens to be one of my personal favorites. In this episode, the rude detective inspector Dimmock fills in for Lestrade in a puzzling series of murders. This is the scene where he finally starts to realize Sherlock’s value in investigations and brings him the hoard of books he has requested. He then, ironically, asks if he can “assist” Sherlock in any way (basically he wants to be part of the team). Sherlock totally shuts him down, and Dimmock leaves with his head down.

This is another scene from “The Blind Banker” (this entire episode should be an underrated scene). In this scene, Sherlock and John are trying to trace the graffiti linked to two murders, and they try to get some insight into the type of paint used. Sherlock admits that he needs some help, and John is basically flabbergasted.

“On painting, yes, I need to talk to an expert.”

The best part about this scene is that his “expert” is a kid called Raz vandalizing a building with graffiti. While Sherlock is talking to Raz, the police come around the corner and the two of them split, leaving John looking awfully guilty. 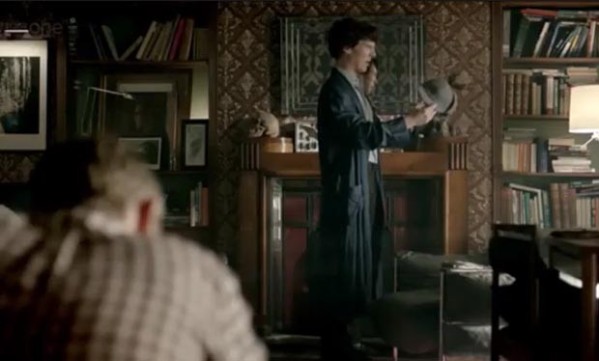 Almost everyone’s heard of the “death Frisbee” that Sherlock complains about constantly, but it’s the rest of the scene that is underrated. The scene shows the pair after Sherlock receives a deerstalker as a gift from Scotland Yard in “The Reichenbach Fall”. The whole scene shows John reading the newspapers and magazine articles about them and their recent cases and shows his genuine concern about the public’s opinion of them; Sherlock, however, can’t get his attention off of the hat. The whole time John’s trying to do something useful, Sherlock complains about the “death Frisbee”. Sums up their relationship pretty well, doesn’t it?

This is, yet again, a scene from “The Blind Banker”, and this scene is the main reason why I love this episode. Early on in the series, Mofftiss defines Sherlock’s hidden heart beneath the outer emotion-void shell. Sherlock and John walk into Sebastian’s office and Sebastian greets Sherlock as if he were an old friend. Then Sebastian goes on to talk about their days at Uni and “jokingly” slips in the conversation that everyone hated Sherlock. I like to think that Sebastian really did mean that as a joke, but the camera goes to Sherlock’s face and you can see all of the bad memories written out on his face clear as day. In this, Mofftiss (and episode writer Stephen Thompson) subtly expose Sherlock as a human and not a machine.

This is obviously a popular scene because this is when Sherlock reveals to John that he’s not dead, but this quote from the scene is severely underrated. When watching this scene, it is easy to skip over Mary’s reaction to Sherlock because we’re so focused on John. But Sherlock’s casual responses to Mary’s complete shock are very funny and perfectly capture the Sherlock we all know and love.

Have any other scenes in mind that you feel are underrated? Comment below!