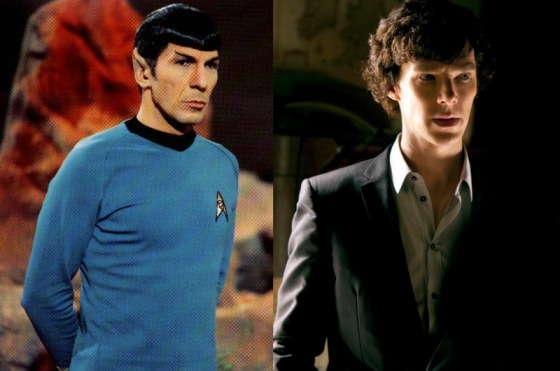 We sadly learned last week of the passing of Leonard Nimoy, beloved actor and all-round ambassador for science fiction. His work on stage, screen, and in the visual arts will be cherished by fans for many years to come. Mr. Nimoy’s best ­known creation, Star Trek’s Mr. Spock, will “live long and  prosper” through the franchise’s films and television show (as well as the legendary “Ballad of  Bilbo Baggins!”).

The qualities most often associated with Mr. Spock – logic, a strong moral code, and loyalty to his friends – actually have quite a few parallels with the character of Mr. Holmes – and there’s several connections between Sherlock and Star Trek in general. Let’s take a look at a few of them.

In Star Trek II: The Wrath of Khan, Mr. Spock sacrifices his life to save the crew of the Enterprise from a deadly explosion. Fans of Sherlock will recall that the detective took on a suicide mission at the end of “His Last Vow” to save John and Mary from Charles Augustus Magnussen. Likewise, Captain Kirk’s eulogy at Spock’s funeral goes “of all the souls I have met on my travels, his was the most human.” This might seem familiar to Sherlock fans as it recalls John’s similar declaration that Sherlock was “the most human human being I’ve ever known” at his friend’s graveside.

In Star Trek III: The Search for Spock, directed by Mr. Nimoy himself, Spock is brought back to life after his spirit (or, “katra”) and body are reunited. Similarly, Sherlock is ‘resurrected’ in “The Empty  Hearse” and reunited with his friends. Though Sherlock’s explanation is a little less sci-fi…

Of course, if Spock is the irascible logician in Star Trek: The Original Series, android Data fills the same role in follow-up The Next Generation. Fans of that show will remember that Data, while playing at being Sherlock Holmes (with loyal friend Geordi LaForge as Watson in tow) in the holodeck, unleashes a virtual Moriarty who becomes all too real. Even as a hologram, Moriarty is intelligent and dangerous enough to warrant a full-­crew long con to render him (and a holo­Irene  Adler) no longer threatening to the Enterprise.

Still, surely the most direct connection between Spock and Sherlock Holmes comes in Star Trek VI: The  Undiscovered Country in which Spock says; “An ancestor of mine maintained that when you eliminate the impossible, whatever remains, however improbable, must be the truth.” This is a well­-known phrase from the Doyle canon and creates a fascinating connection between these two well­-loved characters. What’s more, when Sherlock uses the same phrase in “The Hounds of Baskerville” John calls him “Spock”, as in their world Spock said it first!

Do you know of some other Star Trek/Sherlock connections we haven’t mentioned? Then boldly go where no one has gone before and leave a comment below!

3 thoughts on “A Study in Sherlock and Spock”