Arriving three series in, Mary Watson (nee Morstan) had a hard job endearing herself to the audience yet thanks to great writing and a terrific performance from Amanda Abbington she was a fan-favourite within five minutes of her introduction. She’s the kind of person you would want to hang out with all the time; at least, we thought she was. Mofftiss’s reveal of Mary as the gunman in Magnussen’s office (along with her proceeding to shoot Sherlock) was possibly the most shocking moment of the series, which later unraveled into discovering her true past and identity. Read on for Mary’s top five moments, both good and “bad”. 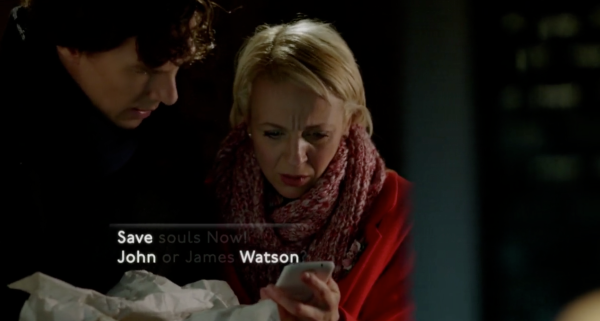 In the beginning of “The Empty Hearse” Sherlock was under the impression that Mary would prevent him and John from solving cases. Even though Sherlock knew that Mary was really important to John, he wasn’t happy that she was getting in the way. But she changed that quickly enough. She was given a clue, figured it out immediately, and rode on the back of a stolen motorbike with Sherlock to save John. After that, Sherlock was happy to have Mary around.

One thing that makes Mary different from John’s other girlfriends is that she realizes the importance of his and Sherlock’s relationship. This scene from The Sign of Three shows what a great addition Mary is to the pair and to the series as a whole. She works backstage to make sure that both of them set up a case for the other, making sure the entire time that they think it was completely their doing. She knows that they need it more than they do themselves. Genius.

This moment in The Empty Hearse may not seem important to the casual fan, but it means so much more than what’s on the surface. When Mary turned up in Series Three it seemed that she was going to destroy Sherlock and John’s partnership – something that maybe Sherlock thought too. But after she said this line to Sherlock after they got kicked out of the third restaurant for that night, it was clear Sherlock – and we – were wrong. Even after what Sherlock did to John and after knowing him for only one evening, she wants to help Sherlock fix it. She knows how much they mean to each other and the only interfering she’s going to do is to help them make up.

You can’t talk about Mary without mentioning her bad side. Every Sherlock fan’s jaw hit the floor when in His Last Vow she turned around with a gun in her hand. Even though finding out Mary’s true identity wasn’t exactly “good”, all of these moments were amazing. This quote is one of the most intimidating lines any character has ever said. This just emphasizes the fact that Mary isn’t exactly cautious about stating the facts. She’s not proud of what she did and who she was, but she’s also not afraid to admit it.

I’m sure I’m not the only one that screamed when she pulled the trigger and put a bullet in Sherlock’s abdomen. Some of you may not agree that this is Mary’s top moment, but this moment is the centre of an amazing plot twist, and she was the star. Even though shooting her husband’s best friend was really really bad, it was one of the very few options she had to keep both Sherlock and John alive and out of jail. Sherlock even elaborated on this fact later at Baker Street. The redeeming factors of this whole situation (even though they’re still not good) are that she was only in Magnussen’s office to protect John in the first place and she knew the shot wouldn’t kill Sherlock. Keeping those in mind, this moment was epic and enhanced Mary’s character and the series entirely.

You can also read our top Mycroft and Molly Moments.

Have any better Mary moments in mind? Mention them in the comments below!