However good Benedict Cumberbatch, Martin Freeman and the rest of the Sherlock cast is we have to save our biggest thanks to Messrs Moffat and Gatiss, without whom we wouldn’t have our beloved reimagining of the Great Detective in the first place. Of course, Sherlock is the culmination of two distinguished careers for writer/producer Steven Moffat and writer/actor (among other things) Mark Gatiss, with both of the duo’s big breaks coming from TV comedy – relationship sitcom Coupling and darkly comic sketch show The League of Gentlemen, respectively. Here are a small selection of projects that Moftiss have either worked on alone or together that Sherlock fans should check out.

If you were lucky enough to see Cumberbatch’s smash-hit version of Hamlet and have a taste for seeing your favourite Sherlock stars take on the Bard, or if you missed it and are looking to catch another Shakespeare-Sherlock crossover then this stage version of Coriolanus, starring Tom Hiddleston in the title role and ably supported by Mark Gatiss, should be top of your list. And if it is, you’re in luck as the play is currently being given an encore screening in cinemas worldwide. See here for more details.

You might remember this CGI movie version of the classic comic book character Tintin from a few years back. However, you might not know that the Steven Spielberg-directed, Peter Jackson-produced blockbuster was written by Steven Moffat. Well, a reinvention of a famous detective – who else would it be? As can be expected from the Moff, the film sports a twisty-turny mystery which the boy investigator and his loyal dog Snowy have to solve. Interestingly, after working on this film, Moffat turned down a multi-picture deal with Spielberg to concentrate on his TV work. 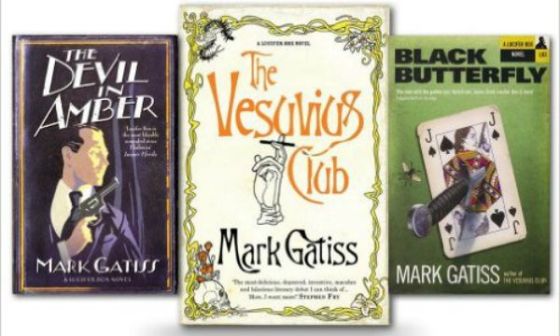 All right, we’re sort of cheating here as this trilogy of novels obviously can’t be watched (there’s no flies on our deductive abilities) but it felt remiss of us not to mention them. As well as being a scriptwriter, Mark Gatiss is also a seasoned novellist, with his work including these books centreing on the dashing and debonair spy Lucifer Box. The novels showcase the humour, pace and invention of Gatiss’ work on Sherlock and we can hope that one day, with Gatiss’ success rate, we will see them adapted to the screen.

Before Sherlock, Moffat updated another Victorian classic to the modern-day – Robert Louis Stevenson’s Jekyll and Hyde. Here, James Nesbitt (later seen in The Hobbit films) plays Tom Jackman, a descendent of the original Dr Jekyll who learns that he suffers from the same (extremely) split personality disorder. While it did not reach Sherlock‘s success, this TV series – which only ran for six episodes – is every bit as exciting, surprising and dramatic and deserves Sherlock fans’ attentions. As an added bonus, a certain other Sherlock personage discussed on this list may pop up in a cameo role…

Yes, it couldn’t really be anything else at number one. Alongside Sherlock Holmes, Moftiss’ other great fictional love is Doctor Who and as such both of them have worked on the show since it returned to TV in 2005. Moffat has famously been the lead writer of the series since 2010 while Gatiss has written such episodes as ‘The Unquiet Dead’ (the one with Charles Dickens) and ‘Robot of Sherwood’ (the one will Robin Hood). Gatiss has also turned up in person a few times, always under heavy prosthetics. Naturally, there is a lot of crossover between Sherlock and Who fans, but if you are someone who never got into the show or stopped watching a while back, it has just returned for another series so it’s the perfect time to jump back in.

Have we missed out your favourite project by either Moffat or Gatiss? Leave it in the comments!