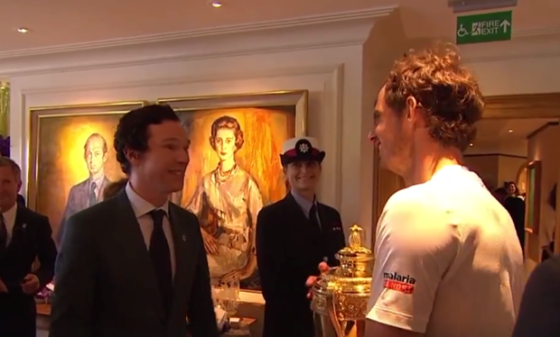 Shortly after winning Wimbledon for the second time in his career, tennis star Andy Murray received another treat that many a Sherlock fan would kill for – he got to meet Benedict Cumberbatch!

Benedict, who had attended the Wimbledon final with his wife Sophie Hunter, spoke with Murray at the All England Club after the game. See the meeting of these two leading stars in their respective fields below:

Upon meeting, Cumberbatch and Murray express just how much they are fans of each others’ work, before Murray asks the actor what he is up to now. As us Sherlockians all know, Benedict replies that he is working on Sherlock Series Four… Which gets Murray just as excited as if he had won Wimbledon again!

Clearly, Murray is a fan of the show – so could a Sherlock cameo from the sportsman be on the cards? Maybe Sherlock and John could investigate a tennis-related murder? We’ve even got the episode’s title – ‘Game. Set. Death.’