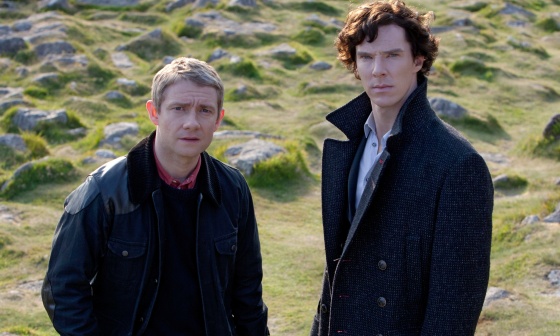 “The Hounds of Baskerville” is based on one of Sir Arthur Conan Doyle’s best-known Sherlock Holmes stories. Sherlocks modern take on the tale sends our Baker Street sleuths to a top secret military base where some ethically questionable experiments are being conducted. Their client is Henry Knight, the son of a Baskerville researcher who was mysteriously killed years ago right in front of his young son. His father’s death has traumatized Henry and he wants to find out once and for all who was responsible.

Out of all the great lines in this horror-style who-dunnit, we’ve whittled it down to the five best.

“The Hounds of Baskerville” contains several memorably tense (yet funny!) exchanges between Sherlock and John. Even when the two are in the middle of a lover’s tiff – after Sherlock got ratty with him the previous evening – John still manages to retaliate with some quick-witted retorts.

4. “Your mind, it’s so placid, straight-forward, barely used. Mine’s like an engine, racing out of control, a rocket, tearing itself to pieces, trapped on the launch pad. I NEED A CASE!” – Sherlock Holmes

As ever with Sherlock, his cravings – namely, for a case and some nicotine – drive him to be even more curt than usual. Though Sherlock obviously values John’s insight when solving cases, the consulting detective can be a bit condescending. Okay, perhaps more than a bit condescending.

3. “You, being all, uh, mysterious with your… cheekbones, and turning your coat collar up so you look cool.” – John Watson

This is one of John’s best zingers in Sherlock’s three series to date. John puts up with quite a lot from Sherlock in this episode – the time when he is drugged without his knowledge being the worst example – but he manages to get some witty digs back at Sherlock as well.

2. “It’s a memory technique, a sort of mental map. You plot a… a map with a location – it doesn’t have to be a real place – and then you deposit memories there that… theoretically, you can never forget anything. All you have to do is find your way back to it.” – John Watson

John describes Sherlock’s famous mind palace – which makes its first appearance here – in which the detective stores every bit of data he deems important—such as 243 types of tobacco ash and the varying tensile strengths of different natural fibres. Nothing about the earth orbiting the sun, however.

Despite all his questionable actions in this episode – seriously, Sherlock, how could you experiment on John like that? – our favourite high-functioning sociopath still manages to redeem himself for his poor behaviour here, when in a rare moment of tenderness Sherlock comes the closest he can come to expressing his feelings for his best friend. Aww, Sherl, all is forgiven!

Tell us your favourite quotes from “The Hounds of Baskerville” in the comments!

6 thoughts on “5 Best Quotes from The Hounds of Baskerville”