Detective Inspector Gavin – er, Greg – Lestrade is a supporting player on Sherlock, but arguably, the show’s very existence hinges on him allowing Sherlock to consult on cases. Not to mention the fact that his popularity amongst fans is nearly as huge as Sherlock’s and John’s. In honour of the birthday of actor Rupert Graves on June 30, we’d like to pay homage to the times when Lestrade stole the spotlight and was the star of Sherlock.

5. The Time Lestrade Interrupted His Holiday 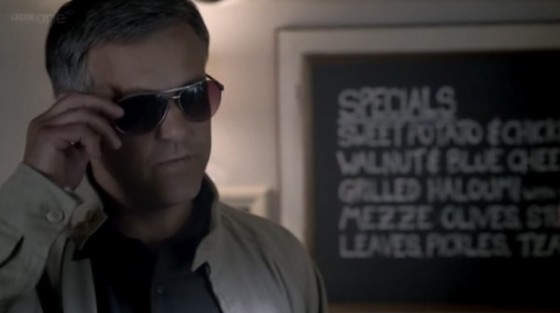 In “The Hounds of Baskerville,” Lestrade shows up at The Cross Keys looking tanned and rested, just in time to conduct an impromptu inspection of the vegetarian restaurant ordering large quantities of meat. The detective helps crack the case and identify the top-secret H.O.U.N.D. The scene memorably – well, for us, not Sherlock – gave us the first mention of Lestrade’s first name: Graham – sorry, Greg.

In “The Reichenbach Fall,” Anderson’s and Donovan’s suspicion escalates about Sherlock’s possible complicity in the crimes he is supposed to be solving. They try to convince Lestrade that they need to bring the Baker Street sleuth in for questioning about the kidnapping case. Lestrade stalls to help Sherlock, but unfortunately, he is only able to briefly delay Sherlock’s arrest.

In “The Sign of Three,” Sherlock sends Lestrade a series of texts asking him urgently for help at Baker Street. Even though Lestrade is about to make a key arrest in the Waters Gang case, he rushes to help the friend who doesn’t even know his first name. Amidst an invasion of helicopters and police cars, Sherlock asks Lestrade if he has any funny anecdotes about John to help him write his best man’s speech. Sometimes you really feel for poor Greg…

2. The Time Lestrade Told Anderson to Let it Go

In “The Empty Hearse,” Lestrade and Anderson chat about whether Sherlock is really dead. Anderson has started The Empty Hearse so that Sherlock’s fans can discuss ways in which he could have faked his death. Anderson is wracked with guilt about his role in driving Sherlock to his supposed suicide. Lestrade cuts to the chase: “Yeah, well that won’t bring him back.”

1. The Time Lestrade Became a Meme

In Sherlock’s most-memed moment, as Moriarty is carrying out his crime of the century in “The Reichenbach Fall,” Sgt. Donovan rushes into Lestrade’s office to let him know about a break-in. “Not our division!” is the hilariously well-timed reply. However, soon he and Donovan are racing to respond to three masterfully orchestrated break-ins at Pentonville Prison, the Tower of London, and the Bank of England! Yet somehow the scene has already been stolen… Only Greg Lestrade can make scoffing his lunch just as cool as Moriarty’s supervillainy.

Tell us about your favourite Sherlock moments when D.I. Lestrade stole the show!

6 thoughts on “5 Times Lestrade Was the Star of Sherlock”