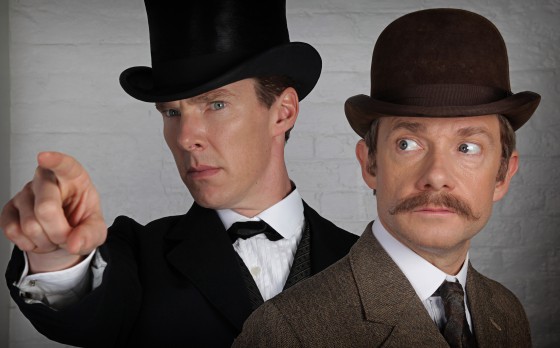 Since the show’s opening episode first aired on 25 July 2010, we deduce that this must be Sherlock‘s fifth birthday! Wow, doesn’t time fly when you’re… waiting hungrily for further episodes.

Anyhoo, to celebrate this special day here are five more Easter Eggs – though given the occasion we should really call them Birthday Presents – that are not only obscure themselves, but appear in some of the more obscure bits of the Sherlock series.

In the pre-Series Three short entitled Many Happy Returns, Lestrade visits the mourning Watson and delivers a box full of some of the (supposedly) deceased Sherlock’s effects. In the brief glimpse of the box we see, there is a full-face mask that is bright yellow in color.

As I wrote recently on my own blog, this is clearly a reference to canon short story “The Yellow Face,” and I also averred that since the story is so very Victorian melodrama and, it must be said, a tiddly bit racist, Mofftiss most likely won’t mine that particular story in more detail than this reference. But hey, you never know: there is The Blind Banker…

How many Jeremy Brett fans out there heard the Granada series intro in the beginning of the trailer for the upcoming Christmas special? I’m not just talking the pan from the Baker Street sign to the Victorian bustling street scene, but the violins in the music itself were so very close to that familiar strain from the earlier series. It can’t possibly be a coincidence. You can listen to that classic tune above and then check out the Sherlock trailer here.

3. The Chocolate Flake Sunk in the Ice Cream Cone

This is another obscure Doyle reference from Many Happy Returns. As we move through each of the international cases solved in an uncannily Sherlockian manner (according to Anderson), one stands out as very near a case briefly mentioned in “The Six Napoleons.” Listen to the similarity of the line uttered by the Indian detective in the video above and this, uttered by Holmes in the original story: “You will remember, Watson, how the dreadful business of the Abernetty family was first brought to my notice by the depth to which the parsley had sunk into the butter upon a hot day.” 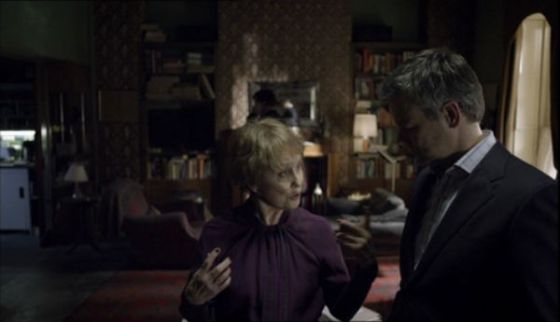 Have you noticed that Mrs. Hudson always wears purple in this series? Every time we see her, she’s in some variety of shade of purple, or a few in one outfit. Even in the upcoming Victorian special, she’s in a purple dress. But in The Great Game, when the Connie Prince investigation is in full swing, Mrs. Hudson chats to Lestrade about how to “do your colors,” and that according to Prince’s color guides, she should never wear cerise, since it drains her. Granted, we don’t see her in as red a spectrum as cerise is necessarily, but ain’t that just another purple? I’ve always found this hilarious…

To wrap up our list we’ll finish with one last one from Many Happy Returns. Rather than a reference to a Doyle story, this one is a bit of foreshadowing for the series that followed the short.

As Anderson tells Lestrade about a case he thinks Sherlock has investigated in Germany, we see someone picking up a newspaper with a headline about said case – and the name of that newspaper? “CAM Global News”, part of the media empire run by soon-to-be nemesis Charles Augustus Magnussen. Nice work there, Moftiss. 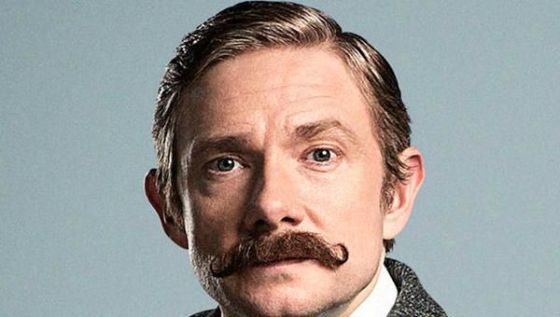 Since the Victorian Watson’s moustache is quite prominent in Paget’s illustrations of Doyle’s work, our beloved BBC John is sporting a fantastic waxed one in the Victorian Christmas Special trailer. Of course he quips that he only wears it because of his illustrator, so that people will recognize him. This echoes the mockery that the fanbase made of his ‘stache in The Empty Hearse, as well as the disdain both Sherlock and Mary have for it in the same episode. It’s also quite similar to the problem the modern-day Sherlock faces as he is famous for wearing “the silly hat.”

Got another juicy Easter Egg – sorry, Birthday Present – for us? Leave it in the comments!