Sherlock and Shakespeare fans alike were eagerly anticipating the BBC’s ambitious adaptions of the Bard’s three plays that comprise the history of the War of the Roses. While the cast was full of the cream of British acting talent (Hugh Bonneville, Judi Dench, Sophie Okenedo… the list goes on), Benedict Cumberbatch had landed the key role as perhaps Shakespeare’s greatest villain – Richard III. So let’s see if the series measured up to the interest.

Henry VI: Part One does not feature any casting links to Sherlock, but anyone looking to watch Cumberbatch as Richard when he appears later on should absolutely watch this installment as well. It centres on the rising unease in the kingdom over the peace-loving Henry VI and whether he deserves the throne. Poor Henry is being attacked from all sides (including by his scheming, adulterous queen), as the War of the Roses breaks out between the Houses of Lancaster and York. Much conspiring and tragedy happens in the drama itself, but it is essential build-up for future installments – ending on the recognizable silhouette of the limping, hunched Richard III…

Henry VI: Part Two is the heart of the conflict, as – despite his name still being in the title – Henry is deposed as king and Richard Plantagenet’s son Edward takes his place. But both of his brothers are not content to be so close to the throne without getting to sit on it. Part Two expertly builds on the set-up of the first to ramp up the drama – as well as the fight scenes. Several bloody battles are scattered throughout, perhaps to punctuate the heady dialogue. This is also where Cumberbatch makes his debut, as Richard grows in his hatred and avarice. Sherlockians should know that Andrew Scott also features here, albeit in a much smaller role (and sadly doesn’t share any scenes with Richard) as the French King Louis. He acquits himself very well, though. And Moriarty would be very envious of his crown.

Richard III, the grand finale of the series, does not disappoint. As the treacherous king who has murdered his way to the throne, Cumberbatch is masterfully malevolent, growling his lines and glowering at the camera. On the surface, it is a classic villainous performance but one that perfectly suits the production – which successfully marries the grand theatricality of Shakespeare’s play with a modern cinematic flourish. Underneath his cruel persona, Cumberbatch also makes his Richard a real tragic figure, as he clearly hates himself just as much as his enemies.

Some who don’t usually watch Shakespeare might be worrying if The Hollow Crown is hard to follow, as the adaptations stick closely to the Bard’s original text. Thankfully, the skill of the direction and the actor’s delivery ensures that this isn’t the case. Sure, there is the odd archaic term, but the themes of greed, betrayal and the corruption of power are universal and easily understood.

Comprising two plays generally considered Shakespeare’s weakest by scholars along with one of his best, screenwriter Ben Power and director Dominic Cooke have trimmed down and edited these plays into three equally tight and enthralling TV dramas, ones that will excite both Shakespeare purists and modern television fans who have been raised on Game of Thrones. For Benedict Cumberbatch fans, they should come for the Sherlock, but stay for the Shakespeare.

View a gallery of behind-the-scenes photos from The Hollow Crown below: 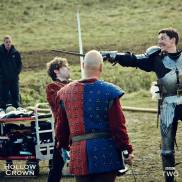