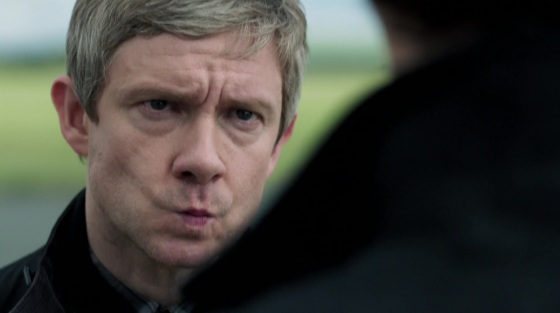 Just when we are getting all excited over spoiler-ific news and pictures of adorable dog detectives, they dump something in our laps to make us sad again. And it’s a big one…

In an interview with The Telegraph, Sherlock co-creator Steven Moffat spoke openly about the difficulty in making the show, with two such in-demand actors in Benedict Cumberbatch and Martin Freeman. He said:

“I don’t know how long we can keep it going. I’m personally willing but I’m hardly the main draw. I would be moderately surprised if this was the last time we ever made this show. But it absolutely could be.”

We know how you feel, John…

As sad as it is, it does sort of make sense. Previously Benedict and Martin (particularly Ben) have said that they would be interested in playing Sherlock and John until old age, but it must be getting harder and harder for them to fit Sherlock into their busy schedules. Still, at least Moffat said  he would be “moderately surprised” if this was the last run. That’s something, right?

He elaborated on his comments by saying:

“There’s never going to come a time when we do a longer run, because this is what the series has become. It’s an occasional treat where you get three movies. It’s how it works. That’s why I think it’s unlikely that we’ve completely finished it. There would be nothing strange in stopping for a while. It could go on forever, coming back now and again.”

So there we have it. While there is a risk that Series Four will be it, it does seem more likely that we will merely have an even longer wait until Series Five rolls around. While that’s not exactly good news, at least that would guarantee us more Sherlock in future.

We’ll bring you more as we hear it.

We previously mused on this being the final series of Sherlock here.