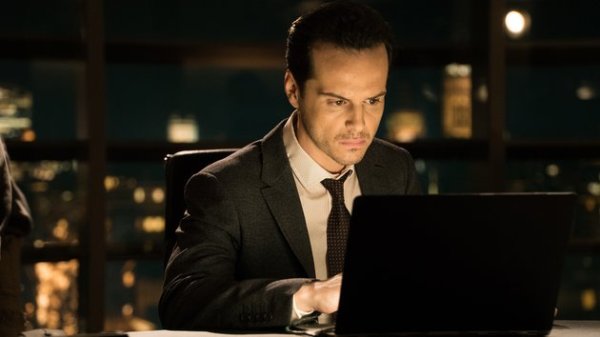 As Sherlock fans eagerly await “The Abominable Bride” (not long now, guys!), they can get a quick fix at the local cinema. SPECTRE, the 24th film in the iconic James Bond franchise, features Sherlock’s own Andrew Scott as Max Denbigh. Denbigh, known as C, is the head of the Centre for Intelligence, which is maneuvering to move toward a data-driven surveillance scheme, “Nine Eyes.” M, played by Ralph Fiennes, opposes Nine Eyes because it will eliminate the “00” programme and will sacrifice citizens’ privacy for security—a theme which is particularly relevant in light of recent current events.

Scott gives a solid performance in SPECTRE and makes the most of his time on-screen. Denbigh’s characteristics will likely be pleasantly familiar to those who have seen his portrayal of Moriarty—he is clever, shrewd, and might have a hidden agenda. As SPECTRE unfolds, we learn more about C’s motives…

Another Sherlock – SPECTRE connection is Naomie Harris’ reappearance as Eve Moneypenny. Fans will likely recall that Harris played Elizabeth Lavenza in the renowned theatrical production of Frankenstein in which Benedict Cumberbatch and Jonny Lee Miller alternated playing the lead roles.

SPECTRE has the elaborate action sequences, cool gadgetry, and wry wordplay that Bond fans know and love. The opening is set during a Day of the Dead festival in Mexico City in which a massive, costumed crowd provides a colorful backdrop for the chase between Bond and his prey. Soon thereafter, we learn of a connection between SPECTRE and the previous Daniel Craig Bond films as the film takes us to the Alps to meet Dr. Madeleine Swann, played by Léa Seydoux. Dr. Swann and Seydoux’s performance represent a much-needed update to the stereotypical ways the franchise has portrayed many of its female characters.

While SPECTRE is a fun and familiar diversion, the film’s climactic confrontation between Franz Oberhauser and Bond lacks tension due to the underdevelopment of Oberhauser’s character. Fans of Christoph Waltz may be disappointed—despite his involvement in a significant plot twist, it falls a bit flat due to how little screen time he receives.

Despite its ups and downs, SPECTRE is a worthy addition to the Bond canon and well worth a watch for fans of Andrew Scott’s work and any Sherlock fans looking for more modern urban thrillers in lieu of our favourite show.

If you’ve seen SPECTRE, tell us what you thought in the comments below!