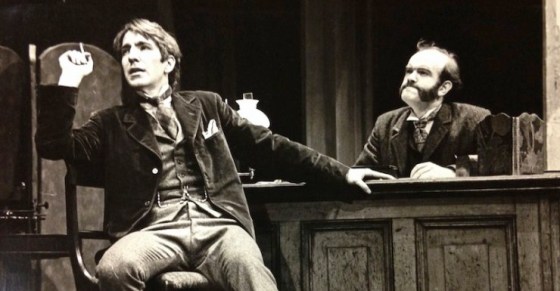 Movie fans across the globe are in mourning today as it was announced that Alan Rickman, known for his roles in Die Hard, Robin Hood and of course as Severus Snape in the Harry Potter films, has passed away at the age of 69.

Amongst his long list of credits, it is a little known fact that he also played the Great Detective himself, in a 1976 stage show featuring the character which played in Birmingham, England. Still to find fame at the time, the 30-year old Rickman’s turn as Sherlock Holmes was, naturally, critically acclaimed. As this excerpt from a contemporary review shows:

Holmes is played with superb coolness and languid authority by Alan Rickman in a performance which interweaves touches of melodrama with masterpieces of understatement in such an absorbing and funny fashion that it dazzles the audience. Others on stage therefore look grey and we have the odd phenomenon of a one-man show with a cast of more than 20.

You can view some rare images of Rickman in character below:

Sherlock fans may also recall that Benedict Cumberbatch is a virtuoso Alan Rickman impersonator, even impersonating his most famous character on The Simpsons.

In contrast to the dour roles he often played, Rickman was known to have a large sense of humour and joked about Benedict’s impersonation of him, saying “get it accurate!”