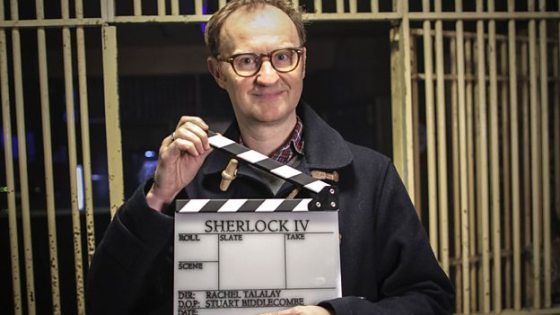 At long, last! After tweets from Mark Gatiss suggested it, the BBC have today officially confirmed that work on the fourth series of Sherlock has begun…

But don’t get too excited. Co-creators Mark Gatiss and Steven Moffat have promised that dark times are ahead for CSI: Baker Street. Here’s what they had to say about the new series:

“Sherlock Series Four – here we go again! Whatever else we do, wherever we all go, all roads lead back to Baker Street – and it always feels like coming home. Ghosts of the past are rising in the lives of Sherlock Holmes and John Watson bringing adventure, romance and terror in their wake. This is the story we’ve been telling from the beginning. A story about to reach its climax…”

Ulp! In other less worrying news, the BBC press release for the series announced that the first episode the three part series is to be directed by Rachel Talalay. The director has worked on many fan-favourite TV series such as The Flash, Supernatural and, most significantly, Doctor Who – for which she helmed 2014’s ‘Dark Water/Death in Heaven’ and last year’s ‘Heaven Sent/Hell Bent.’

Sherlock himself Benedict Cumberbatch said that he was “genuinely thrilled to be back filming Sherlock with all the cast and crew. I can’t wait for everyone to see season four. But you will have to wait… though not for long… And it will be worth it.”

Producer Sue Vertue also said: “It’s taken a while to gather everyone together for series four, but I can confidently say I think it will be well worth the wait!”

Though no official word has been given on this, we expect to see Series Four in early 2017. It’s finally happening, people!