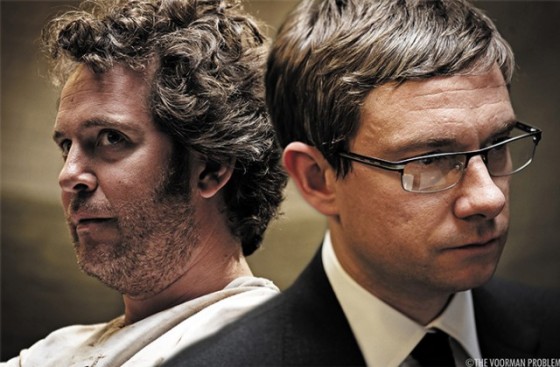 You could argue that Sherlock Holmes thinks of himself as some kind of deity, but in this short film Martin Freeman’s character meets someone who literally believes they are God.

Initially released back in 2013, The Voorman Problem was greeted with high acclaim and went on to earn nominations at both the Academy Awards and the BAFTA Awards. Now it’s available to buy from the good people at WeAreColony and we would urge you to check it out.

The film sees Freeman as Dr Williams, a psychiatrist sent to examine a convict (the titular Voorman) who has a very peculiar delusion – he completely believes himself to be the creator of the universe. What’s more, he has convinced his fellow inmates that he is, too. As is shown in the film’s opening scene where Williams is greeted at the prison gates by the sound of holy chanting.

To say any more about the plot would be to do the short a disservice. Suffice it to say that things escalate nicely over the trim 13 minute runtime with not a beat wasted, as with the best short films. With its tongue firmly in its cheek, The Voorman Problem is a subtly funny black comedy that, despite being set almost entirely in a small prison cell, deals with some big ideas about religion, existentialism and mental illness.

Freeman gives a typically exquisite performance as a rational man pushed to breaking point by Voorman’s bizarre belief in his own omniscience. Opposite him is a terrific Tom Hollander (Pirates of the Caribbean, The Night Manager), who pitches Voorman perfectly. The temptation must have been to play it large but the character is made so much more effective – and more disturbing – by the serene, calm air that Holland gives off. Which makes sense, really. If you were God, then nothing would faze you as everything that happens is part of your grand design.

Based on the novel number9dream by David Mitchell (Cloud Atlas), The Voorman Problem also stars Simon Griffiths and Elisabeth Gray and was written by Baldwin Li and director Mark Gill. It can be purchased, in a bundle with several making-of featurettes, from wearecolony.com for £1.99.

Have you seen The Voorman Problem? What did you think about it? Let us know in the comments.