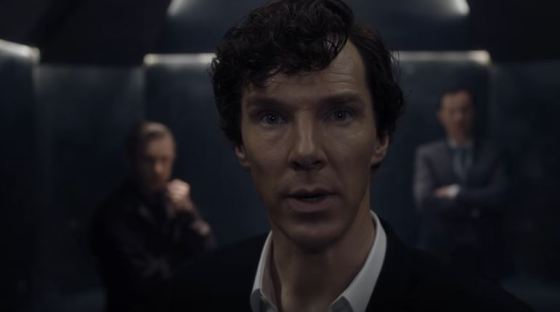 This weekend brought our second full-length trailer for the upcoming Sherlock Series Four. And you could say it had a big effect on the fandom (and the award for biggest understatement goes to…). Read on for our breakdown of the trailer, as we try and pry some out some clues about the new series from it. Warning: we do pretty deep into what we think is the finale. So, if we are right, there may be big spoilers ahead.

First, here’s the trailer, in case you haven’t seen it yet.

After an artsy opening shot which switches focus between John and Sherlock, things cut to Mycroft standing in front of a burning house. Ladies and gentlemen, start your questions…

Whose house is this? At first I thought that it was the Holmes family home, but when you compare the two buildings you can see, that they aren’t similar at all.

So if it’s not the Holmes family, then whose is it? Is it Mycroft’s house? If it is, then who set it on fire? Mycroft himself? But why would he do this?

If we take the “evidence” we have right now, so pretty much only the dialogue and the recent episodes and the rumours of Season 4, we could assume that it was Mycroft who has set this building on fire. When you take a closer look at it, it looks kind of abandoned. Maybe it’s the house of Sherrinford, the third Holmes brother who is supposed to appear in Season 4, which sort of makes sense with what we know about Sherrinford. “You know what happened to the other one?” Mycroft said. Clearly, something bad happened to him. Was he caught in a fire, maybe?