Yesterday, the Sherlock gods, the great Moftiss, shined down on us and delivered the very first trailer for the upcoming special! Of course, back in July a clip from the one-off episode was released but this is our first look at the whole of the special. Have a watch of it below:

Now pick that jaw up off the floor and let’s get down to business. We’ve got a trailer to dissect. As Sherlock says, “the stage is set. The curtain rises. We are ready to begin…”

Well, it wouldn’t be Sherlock without a crime, would it?

“You promised to keep him safe…”

If making a promise to a woman in distress sounds like quite a heroic thing for our beloved sociopathic Sherlock to do, this might be a clue that Sherlock (or rather, Holmes) here will be closer to the man created by Conan Doyle. While he was prone to rudeness and mood swings just like Cumberbatch’s incarnation, the original Holmes is a well-mannered Victorian gentleman too.

Something’s afoot in the country

As hinted at by Sherlock’s dramatic speech (“we all have a past, Watson. Ghosts. They are the shadows that define our every sunny day”) the special will play with the idea of ghosts and things coming back to haunt us. And it looks like it is also set in the gloomy English countryside. So, in other words, it looks like Moftiss are taking inspiration from the classic novel The Hound of the Baskervilles for the special. 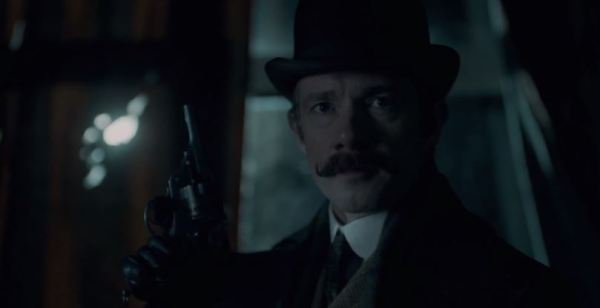 Anyone who feared that the trip back in time would reduce Martin Freeman’s wonderfully rounded Watson to the stereotypical bumbling version of the character (not that that is the Watson from the stories, of course) will be pleased to see that Victorian Watson can handle himself just as well as regular Watson. In fact, this scene – with gun in hand and coat billowing in the breeze like a moustachioed James Bond – is probably the coolest any Watson has ever looked. 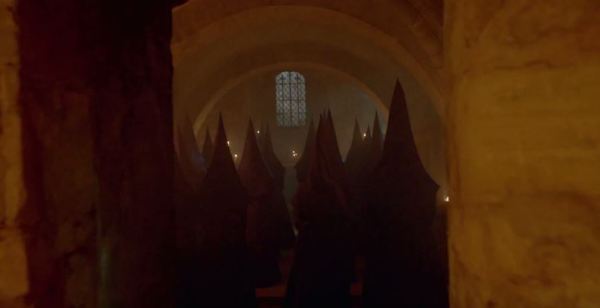 Hidden amongst the busy trailer, we can glimpse these foreboding fellas who look like, depending on your point of reference, the Death Eaters from Harry Potter or the Ku Klux Klan. Interestingly, the Klan were actually the villains of a Holmes story before – namely Doyle’s short story ‘The Five Orange Pips.’

What made Sherlock Holmes?

The trailer gives us a lot of clues with which we can piece together how the special will play out (hey, we’re just like detectives!) but one of the juiciest is this scene which suggests that the episode will explore just what made Sherlock the way he is. “What made you like this?” asks John. “Oh, Watson,” Sherlock replies. “Nothing made me. I made me.”

The latest in a long line of Sherlock’s fetching dressing gowns (or robes, if you’d prefer) that have featured in the series. In the trailer, Sherlock is modelling a snazzy purple number but, just to ensure he doesn’t look too flamboyant, he’s also glaring and wielding a gun. Yep, that’ll balance it out.

We had already seen Mrs Hudson in the clip but this trailer gave us our first glimpses of the Victorian versions of Mary and Lestrade too. However, there’s still no sign of Louise Brealey’s Molly or Mark Gatiss’ Mycroft who will surely be in the special. And, dare we say it, perhaps Andrew Scott’s Moriarty will turn up too…

And let’s have a look at those sideburns

Ladies and gentlemen, we give you the biggest, bushiest sideburns you’ll ever see.

Rupert Graves previously said at the summer’s San Diego Comic Con that he had “two hedges” stuck on his face in the special and, boy, he wasn’t joking.

It’s still the same as ever 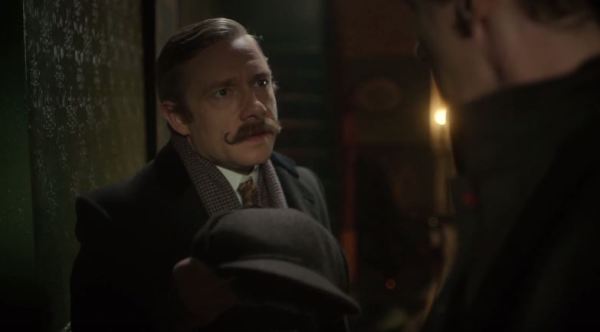 Like we said above, some fans might have worried that taking things back in time would have affected the unique dynamic between Sherlock and John but the final scene from the trailer – in which John’s telling Sherlock off and Sherlock’s refusing to behave – should assuage those people that our heroes are still the same men, they’re just wearing different clothes.

Bring on, er, whenever it is the special will air!

What did you find most exciting about the trailer? Let us know in the comments!