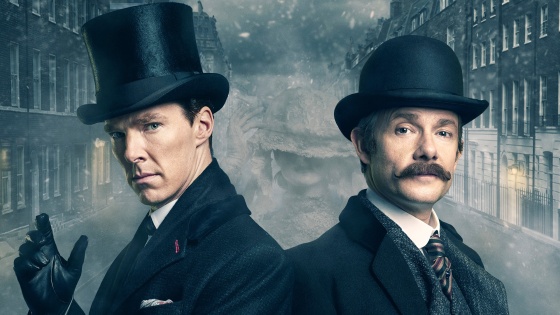 More than any other show, Sherlock has to meet exceedingly high expectations – because it takes so long to get on the screen (we’re not complaining by the way, we understand the cast and crew have got to do other brilliant stuff). After two years of waiting for a single (admittedly, movie-length) episode, if the ‘#ShSpesh’ – as Twitter had it – was less good than we had built it up to be in our heads than it would go down as a massive disappointment. Thankfully, ‘The Abominable Bride’ has something for every kind of Sherlock fan – from the newest convert to the oldest Sherlockian.

Many will be pleased to know that the shift to Victorian times does in no way rob the show of the pace and drive that sets Sherlock apart from the myriad Holmes adaptations that have come before it. Steven Moffat and Mark Gatiss – this is the first episode the two creators have written together – of course deserve the initial praise for pulling off a sharp script that makes such a task look effortless. However, the cast likewise do a terrific job of translating their characters to a different era while retaining what makes them so beloved in the regular series.

There is also some amazing direction by Douglas Mackinnon, who ensures Sherlock‘s signature visual vitality and inventiveness is present despite not being in the, er, present. And congratulations to the production and costume designers Arwel Jones and Sarah Arthur for the gorgeous realisation of Victorian London and the sartorial elegance of Benedict Cumberbatch and Martin Freeman, who look as if they have stepped straight out of the Sidney Paget illustrations from the original stories. Make no mistake, this is the most faithfully-rendered adaptation of Conan Doyle’s world since the Jeremy Brett Granada series.

But what about the nuts and bolts of the episode – how does it play out? Well, all we will say is that – as you may guess from the synopsis – the plot is a full-blooded piece of Victorian gothic and as such is probably closest to ‘The Hounds of Baskerville’ of the Sherlocks that we’ve seen so far. For the most part, it does also follow that more Series One and Two sensibility of clever crime drama rather than Series Three’s character comedy with a side order of mystery. The character moments and humour are absolutely still present and correct, however, and the writing is uniformly quiptastic and quotable. We’ll just give you one clue as to the funniest scene in the whole thing: ‘potato.’

Critics looking for something to pick at will no doubt claim that the return to Victorian times is self-indulgent, so is it? Well, yes, of course it is a bit but Moffat and Gatiss have never been shy about the fact that the show was always a passion project for two Sherlock Holmes fanboys from the very start. Yet the change of setting does highlight a very key fact about the character of Sherlock Holmes – that he is always a man out of time. Let’s just hope that he returns in a shorter amount of it for Series Four.

If you’ve seen the special already and wish to discuss it, head over to our discussion page here. Please leave any comments below spoiler-free!