By now, you might have seen the new short promo video for Sherlock Series Four. It’s only 15 seconds long, and literally nothing happens in it – besides John and Sherlock sitting in their armchairs in a curiously flooded living room. At least, that’s how it appears at first. But when you take a closer look, you can spot some small details which make your heart skip a beat. Eventually you’ll make a sound that is commonly known as “epic gasp”.

Here are some hints and easter eggs we espied in the promo. Let’s see what they might mean…

For die-hard fans, or just for people who have read the original books of Sir Arthur Conan Doyle, this one is a really cute easter egg.

In the original stories, Sherlock Holmes kept his Tobacco in such a curly, Persian slipper, which also appears in the teaser. So it either could be just an easter egg for “the insiders” oooor it is a reference to “The Blind Banker” where Sherlock fights with this one Osmanian looking man in the living room of 221B Baker Street. Is this man coming back? Was he more important than we thought? Or is the slipper just a small wink to literature fans?

The promo features another nod to Doyle’s work in the image seen below. Notice the knife pinning letters onto the mantelpiece. It’s a habit of Holmes’ in the books, and we have seen Sherlock do it on the show before as well. 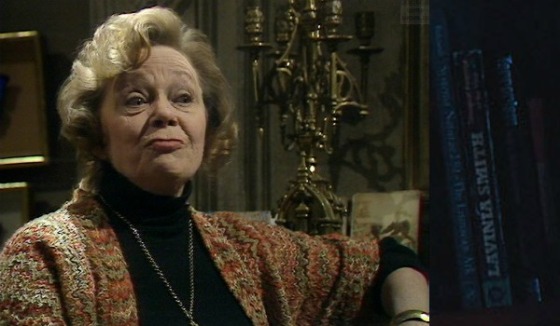 Hats off to the Radio Times for noticing this one. Hidden on the bookcase behind John (on the shelf second from the top) is a book written by one Lavinia Smith. This name won’t mean anything to Sherlockians but any hardcore Doctor Who fans will know it as the aunt of famous time traveller Sarah Jane Smith.

Though not seen, it is mentioned in Sarah Jane’s first story ‘The Time Warrior’ that her aunt Lavinia is a brilliant virologist – a doctor of viruses. At first this seems like a random Doctor Who easter egg – perhaps inserted by massive Whovians Steven Moffat and Mark Gatiss, but there could be a bigger meaning here.

Episode two of Series Four is ‘The Lying Detective’, based off Doyle’s ‘The Dying Detective’ which features the villainous Dr Culverton Smith killing his victims with a deadly bacteria. Could Sherlock turn to Lavinia Smith’s book for help in defeating him?

In the cabinet behind Sherlock can be found a page of a book headed A Father’s Advice. This refers to a famous poem about gun safety, written by Mark Hanbury Beaufoy in 1902. You can read the whole of the poem here:

It’s hard to say just what this could be referring to. The obvious suggestion is that it’s a joke about Moriarty’s death. Poor old Jim obviously needed to learn more about gun safety, what with shooting himself in the head and all.

Alternatively, it might be a hint that Sherlock’s shooting of Magnussen at the end of Series Three is going to play on his mind. After all: “All the pheasants ever bred, won’t repay for one man dead.”

Next to Sherlock and by the fireplace, you can see Mycroft’s umbrella. Many are obsessing over its presence here as it has never previously been shown without its owner. So why would Mycroft leave it in Baker Street? Well, maybe because he doesn’t need it anymore… Maybe because he’s going to…

No! We’re not even discussing that option. La la la, fingers in ears, moving on…